Why Do People Get More Colds & Flus In The Winter?

Why Do People Get More Colds & Flus In The Winter? 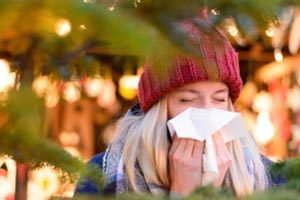 Winter is known as cold and flu season, but why? Medical researchers have a number of theories, including different types of viruses that thrive in the winter and the ability for bacteria to better survive and thrive in dry winter air.

The average adult catches 3 colds per year, while the average child under 6 can experience as many as 6 colds in one year. Cold weather creates an environment where cold and flu viruses better survive and infect people, but there are different strains of viruses that impact people during summer and winter.

The colds and flus associated with the summertime are actually more brutal and harder to fight off. While winter colds are nasty and short, summer colds can drag on and on. Rhinoviruses tend to peak in the spring and fall, while influenza viruses peak in the wintertime. There are over 100 different strains of rhinoviruses, and it’s still not entirely understood why some people are more likely to get a certain strain over another person.

So Why Do More People Get Sick In The Winter?

Some people believe that dry indoor air contributes to illness by allowing aerosol droplets from a sneeze to survive and thrive. According to research out of Tianjin University in China, students living in dorm rooms with poor ventilation were more likely to catch colds. Dry outdoor air can have the same impact, allowing the flu virus to survive longer and transmit more readily. Furthermore, according to researchers at Virginia Tech, good ventilation and high indoor relative humidity makes the influenza A virus inactive.

Animal research points to the fact that as internal body temperature declines due to exposure to colder weather the immune system weakens and is not as readily able to fight off invaders. This study comes out of Yale University School of Medicine. Akiko Iwasaki, professor of immune biology at Yale and co-author of the study said, “It has been long known that the rhinovirus replicates better at the cooler temperature, around 33 Celsius (91 Fahrenheit), compared to the core body temperature of 37 Celsius (99 Fahrenheit).”

In order to help find the answer, Iwasaki and his colleagues “used mouse airway cells as a model to study this question [and found that] at the cooler temperature found in the nose, the host immune system was unable to induce defense signals to block virus replication.”

While fluctuations in internal body temperatures seemed to have no impact on the virus, the body’s indirect immune response to the virus changed depending on temperature. The warmer climate showed a stronger response to fighting off infections, while the cooler temperatures resulted in a weaker response.

Iwasakai said, “By inhaling the cold air from the outside, the temperature inside the nose will likely decrease accordingly, at least transiently.”

In other words, the colder it is outside, or in your immediate environment, the less capable your body may be at fighting off infection.

Iwaskaki is quick to add that this isn’t definitive proof by any means. “Our study did not directly test this; everything was done in tissue culture dishes, and not in live animals exposed to cold air.”

How To Help Prevent Colds In The Winter

You’re more likely to get sick this winter, but you can help reduce your risks by…

-Avoid cold, moist weather as much as possible. When the weather is moist, viruses can survive longer.

-Get plenty of rest, as a decreased amount of sleep (less than 7 hours each night) translates to a higher likelihood of getting sick.

-Take daily probiotics and vitamins. During the winter, you are less likely to consume adequate amounts of fresh fruit and vegetables. Probiotics such as bifidobacteria and lactobacilli help maintain healthy digestion while also increasing your body’s immune system defenses.

If you do get sick, Urgent Medical Center is open extended hours and on the weekends. We provide a speedy diagnoses and treatment so that you start feeling better as soon as possible.