Are You Prepared For Flu Season 2013? You Should Be!

Are You Prepared For Flu Season 2013? You Should Be! 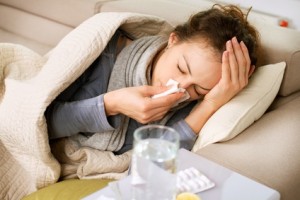 At first thought the flu seems rather harmless, sure throwing up isn’t fun but it’s rarely detrimental to your lifelong wellbeing. Well think again, because when it comes to the flu there might be more to worry about than instantly assumed. For starters, flu season 2013 has only just kicked-off and already the first deaths have been reported. While some remain at a greater risk than others, being prepared for whatever coughs come your way is key to keeping healthy this winter.

Have you ever noticed that everyone seems to get sick around the same time, usually during the coldest months? That’s because flu season—the outbreak of influenza—becomes most common and worrisome from the months of October on through February, typically peeking in severity around January. According to the CDC (Centers for Disease Control), each year 5-20% of the population will come down with the flu, and 200,000 of these individuals will end up in the hospital as a result. Seasonal flus typically last no longer than one or two weeks, although prolonged symptoms can be a sign of other problems, such as respiratory complications, pneumonia, or dehydration. You know your body better than anyone, if this flu seems different or simply unshakable, contact a doctor sooner rather than later.

How the Common Flu Turns Deadly

Should you drop everything and book-it to the local hospital the moment you see signs of the flu? Perhaps not, but beware the flu fights hard; after all the flu itself is caused by a host of living organisms that overtime slowly adapt to be stronger. This is why it is important to get the flu vaccine every year, as the flu virus is constantly growing and changing, never remaining exactly the same. Pandemonium ensues when a new and particularly powerful strain of bacteria enters society—think back to the 2009-2010 flu season when people started wearing masks over the lower portions of their faces in fear they’d catch swine flu. A new vaccination had to be created in order to cure the infected, and despite fast moving efforts, 12,000 people died from swine flu, the majority of which were less than 65 years old.

Thankfully swine flu is an extreme case scenario, CNN’s Sanjay Gupta reports that most people don’t usually die from the flu itself, but instead the flu simply worsens prior complications, which can then lead to death. According to the CDC  you are more likely to be negatively impacted by the flu if you have a preexisting condition, compromised immune system, are under 2 years old, over 65 years old, pregnant, and/or if you are of American Indian decent.

You get the flu because a bacterium from one sick person finds its way into your mouth or nose. It seems like you’d have to be fairly close to someone else for this transaction to occur, but even if you keep a fair distance from all sick people you still are not safe. Germs that cause the flu virus can thrive on counters, and other surfaces, long after they’ve been sneezed out, just waiting for their next victim. If you touch the surface they invisibly reside on before touching your face, it is so easy for the bacteria to seek new life within you, long after its old human host has ventured off. Since flu season and holiday season are one in the same, large crowds are sure to find you. Whenever you are out in public make sure to keep your hands down, away from your nose and mouth, until you have a chance to wash them.

You can be as cautious as you’d like, but one day, as you are standing in line at the grocery store, someone is going to sneeze on you. Therefore, the best way to battle the flu is with a flu shot. With one shot you are getting protection from swine flu and 2 other types of influenza-causing bacteria that are expected to surface this season. The vaccine introduces a minuscule dose of the virus so that your body naturally begins to produce antibodies, which will protect you later, when a more lethal dose of the flu virus unknowingly sneaks into your body. Plan ahead, the earlier you get your shots the better, as it takes up to 2 weeks for your body to build up full immunity to the virus.