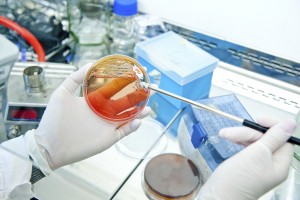 A wound culture is a simple procedure administered in order to test for the presence of fungus, bacteria, or a virus in a cut, gash or injury of any kind. A collection of skin, fluid or tissue is needed to determine if an infection is growing on or around the wound. The sample is placed inside of a sealed container with a substance known as growth medium or culture medium to promote the growth of already present organisms.

If the culture is positive it is important to uncover what kind of bacteria is present in order to take the proper actions to heal the wound. Once a positive wound culture is identified, a chemical test, microscope or both may be used to identify the type of organisms in your wound.

The depth of a wound will influence the type of bacteria most likely to grow in it. The majority of bacteria grows in oxygen and is known as aerobic bacteria. This type of bacteria is typically found in superficial wounds that are closer to the surface of the skin where oxygen is readily available.

Bacteria that grow without oxygen are known as anaerobic bacteria, which are typically found in a deeper wound or abscess. A wound culture will identify if a wound is infected with anaerobic or aerobic bacteria.

Why Is A Wound Culture Important?

The human body is a cesspool of bacteria, but that’s not necessarily a bad thing. Certain bacteria are naturally found in certain parts of the body and as long as they remain where they are supposed to, they will not cause you to get sick or suffer from any sort of infection. On the other hand, if bacteria travel to a part of the body not typically found, illness or infection is likely to arise.

A perfect example of this is the E. coli bacteria, which is commonly located within your colon and anus. If E. coli remains there you will not get sick, but if E. coli travels from your anus to your urethra, you are likely to develop a urinary tract infection.

There are many ways for the wrong bacteria to enter an open wound, which is why the risk for infection is so high. If your wound culture turns out positive you have the chance to fight back and prevent the infection from spreading or worsening.

Once an infection is determined as positive another test known as sensitivity testing is conducted to identify the best form of treatment or medicine.

The three main reasons skin and wound cultures are necessary include:

How Should You Prepare For Your Wound Culture Test?

Wound cultures are fairly simple tests that require little to no effort on your part besides simply showing up. You will be asked a few questions at the time of your culture test, such as how the wound originated, or if you have taken any antibiotics recently. This is your chance to address any concerns you may have regarding your wound with the doctor.

How Is A Wound Culture Performed?

The goal of a wound culture is to collect skin, fluids or tissues from the affected area. A sterile swab is inserted in the wound to collect as much tissue or fluid as possible. This is typically a painless process, but may involve some pressure or slight discomfort depending on the wound.

If a wound has already begun to scab over a small needle may be used to collect fluid from the wound or abscess. If a portion of skin needs to be removed, or any other type of pain is suspected the doctor may give you a shot to numb the area before the procedure is conducted.

The collected sample is then placed inside of an anaerobic or aerobic culture tube, or both, depending on what type of bacteria is suspected. Once the bacteria is placed in the tube for testing it can take anywhere for 1 to 2 days for bacteria to start growing. Fungi need several days to grow and viruses, which are placed in tubes with living cells, require weeks to grow. If sensitivity testing is required more time will be needed. (Reference)

Urgent Medical Center provides fast, effective wound culture tests you can count on any day of the year, no appointment needed.