What You Need To Know About Measles

What You Need To Know About Measles 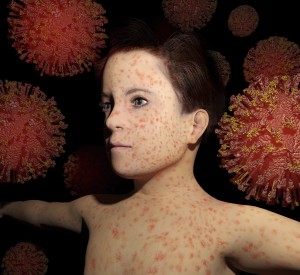 Measles is a highly contagious infection that causes a rash to start on the face and spread across the body. This is why it is often referred to as rubeola or red measles.

Since January 1st over 84 people across the US have been infected with measles after being exposed at the Disneyland in California. The US generally experiences less than 84 cases of measles in one full year. Medical professionals remain unsure just how many more people will become infected since measles is one of the easiest viruses to spread from person to person.

Here are some of the most commonly asked questions and answers about measles.

Are Most People Vaccinated Against Measles?

Measles are generally rare in the US and Canada because of the MMR (measles, mumps, and rubella) and MMRV (measles, mumps, rubella, and varicella/chickenpox) vaccines most children receive with their normal shots. Vaccinating your child against measles is the number one thing you can do to help prevent them from getting it. The vaccine is a small, weakened dose of the actual virus and works to prepare the body to properly react in case of exposure. The vaccine is not known to make people sick and provides good protection against measles all throughout life.

Children should be immunized at 6-months and again at 2-years-old in order to have immunity against measles for life. Although, many parents have opted out in recent years due to the theory that certain vaccinations may lead to the development of autism.

Can You Get Measles Again If You Have Already Had It?

Anyone born before 1957 has likely already had measles before, but unlike chicken pox you can get measles more than once.

How Serious Is Measles?

Measles is not as serious as people often assume. Measles used to be a much more serious problem before the vaccine was made available. In fact, it is estimated that 3-4 million people in the US were infected with measles in an average year, with around 400 to 500 deaths, 48,000 hospitalizations, and 4,000 cases of encephalitis, or swelling of the brain. (Reference: CDC)

Thanks to modern medicine the vast majority of infected individuals are able to recover and return to life as normal within a couple of weeks. Not to mention, far less people are infected with measles in the first place. Still, 1 in every 1,000 children is prone to developing long-term debilitating neurological disabilities associated with measles. The death rate for measles is fairly low, around 1 in every 10,000 cases.

Adults can get measles too, and generally experience worse symptoms than children.

How Does Measles Spread?

The scary thing about measles is that it spreads very easily. In fact, measles is known as one of the most contagious viruses on the planet. The virus can remain in the air for two-hours after the infected individual leaves, infecting anyone that breathes in the same air. This is why the average individual infected with measles will spread the virus to 12-18 other people. In other words, you don’t even have to see or make actual contact with an infected person to catch measles.

What Are The Symptoms Of Measles?

After exposure to measles you may not develop any symptoms for 7-21 days. Measles usually leaves you feeling sick for one week to 10 days. The virus starts off like any bad cold, including a cough and runny nose, and within 2-3 days tiny white spots may appear inside of the mouth. About 3-5 days later a rash with flat red spots appears on the face, spreading to other parts of the body in a downward motion. Raised bumps may form over the flat rash. Usually the highest fever occurs along with the rash, spiking to 104 degrees Fahrenheit or more. Within a few days the rash and fever should both subside.

The most common symptoms of measles include:

How Is Measles Treated?

In most cases measles will get better with home care. You want to stay adequately hydrated and get plenty of rest. Medications are available to reduce fever and discomfort. Since measles is highly contagious it’s important that you stay home from school, work, and any other public places for at least 4-days after the rash first makes its appearance.

When Do You Need To Visit The Doctor For Measles?

While measles is generally treatable and leaves no lasting negative effects, it can turn dangerous in rare cases. Contact a doctor if:

(Learn more on this topic)