What Are The Symptoms Of Tuberculosis?

What Are The Symptoms Of Tuberculosis? 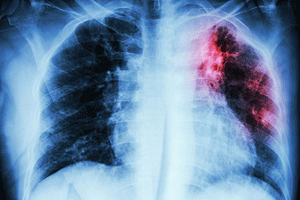 Tuberculosis is spread through the air and causes a persistent cough, chest pain and a variety of other symptoms that may appear similar to a common cold, but if it is not treated early on it can be fatal.

Within a century, TB went from killing many people to very few people, all thanks to vaccinations. In the 19th century, TB was referred to as “consumption” because of the drastic weight loss those infected suffered. It was also called “the white plague,” because those with TB develop a very white ashy complexion. TB is a far cry from the social issue it once was, but it still presents a threat to society and anyone that comes into contact with it.

Today there are fewer than 200,000 cases reported in the US each year. TB has been on the decline since 1992, but it’s still around and claiming lives every year. In fact, some worry that the development of drug-resistant strains of the bacteria could contribute to an additional 2.4 million deaths per year in the near future. Interestingly, TB is the leading cause of death in regards to infectious diseases around the world. While 10 million people around the world are diagnosed with TB each year, around 1.5 million die as a result.

The most common symptoms associated with TB bacteria include:

-A persistent cough that lasts for 3+ weeks. You may also notice blood or mucus coming up when you cough.

-Feelings of fatigue or weakness

Who is at the greatest risk for getting TB?

Anyone can develop active TB, although certain factors put you at a higher risk. You are at a much greater risk if you were infected with TB bacteria in the last 2 years, or if you have a medical condition that weakens your immune system.

Other risk factors include:

-You spend time with someone that has TB.

-You traveled to a country where TB disease is prevalent.

-You work or live in an area where TB is more common, such as a long-term care facility, prison/jail, or homeless shelter.

-You are in the healthcare industry and regularly work with patients that have been exposed to or are infected with TB.

-You are HIV positive.

-You are younger than 5-years-old.

-You smoke or abuse alcohol and/or drugs

How is TB diagnosed?

TB presents similar symptoms to many common illnesses. Testing is required in order to identify if you have TB or not. TB skin tests and TB blood tests will identify if someone has TB, but neither indicates if TB is latent or active. Chest x-ray and sputum samples are also used to determine the presence of TB.

You should get tested for TB if you fall into any of the risk groups mentioned above, have been around someone with TB or traveled to a country where TB is common.

A complete medical evaluation for TB includes going over your medical history, a physical exam, testing you for TB infection and undergoing chest radiograph and/or diagnostic microbiology to see if you have latent or active TB. If you do have active TB disease you should undergo a test for drug resistance in order to identify the most effective form of treatment.

It is estimated that millions of people in the US are infected with latent TB. Without proper treatment, these people are at risk for developing active TB at any point in time. If you or your loved one has been exposed to TB, contact Urgent Medical Center as soon as possible for tests and treatment.