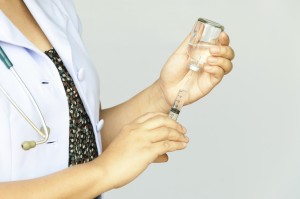 Are you up to date on all of your vaccinations? Vaccines save lives and reduce the number of illnesses people contract every day. Over the years we have added a number of new vaccines to the list, creating some startling results. Regardless of the many lives vaccinations have saved, vaccines have gotten some heat in recent years. Some parents have shied away from vaccinating their children in fear of rumored side effects, such as autism. Regardless, vaccines have drastically reduced illness and death rates in the US. Without vaccines there would be a lot more suffering in the states.

Tynan DeBold and Dov Friedman created heat maps to visually represent the impact vaccines have had on illness rates. The incredibly telling maps were recently published in the Wall Street Journal. Each map represents a different illness, highlighting the number of infected individuals in the US over a period of 70-years, before and after the introduction of a vaccine. The maps use different colors to represent the number of cases per 100,000 people. The charts are further broken down by state. The data comes from the CDC, which annually produces a Summary of Notifiable Diseases solely based on confirmed cases.

According to the maps, it often takes a solid 5-10 years after a vaccine is introduced to see the rates of certain illnesses fall to nearly 0. Although for certain diseases, such as Polio, rates decline by as much as half within as little as 1 to 2 years of the vaccine’s introduction.

How Vaccinations Have Impacted Measles

Due to the current measles outbreak in the United States, people are talking about this virus more than they have in a long time. But before the measles vaccine was made available everyone was talking about measles, after all it was incredibly common and widespread. Measles, just like polio and rubella, is considered a highly infectious disease, capable of spreading through the air without direct contact with an infected individual.

Due to the highly contagious nature of measles a vaccination was highly coveted. Almost immediately after the introduction of the measles vaccine in 1963 the number of cases dropped rapidly.

How Vaccinations Have Impacted Polio

Polio was a huge issue that caused parents great worry every summer when another outbreak was bound to occur. Children were sent away to live with relatives in the country, kept out of public swimming pools, and largely isolated in fear of the disease. The public anxiously awaited a vaccine for polio and in 1955 the polio vaccine was finally licensed. Jonas Salk, the inventor of the vaccine became an overnight idol.

It took time for the vaccine to be introduced to the public, but by the mid 1960s most were vaccinated for Polio. It is incredible to see how Polio is nearly nonexistent today when not too long ago it was common enough to cause a great deal of worry, discomfort and even death.

Looking at the heat maps for Polio outbreaks it is stunningly clear how much the vaccine helped. The amount of cases practically cut in half within the first year the vaccine was introduced. Within 5 years, Polio was hardly a threat to worry about at all. Today, the number of polio cases hoovers near 0 out of 100,000 people in all US states. Prior to 1955, hundreds of thousands of cases per 100,000 people were reported in each state.

How Vaccinations Have Impacted Your Life

In 1545 a smallpox epidemic raced through India, and in 1578 a whooping cough epidemic hit Paris. Cities around the world resorted to quarantining infected populations, unsure how else to stop the spread of diseases.  In 1796, the very first human made vaccine was invented for smallpox. Since then, many other diseases have been controlled through the use of vaccines. (See timeline)

Hepatitis A, mumps, whooping cough, Polio, rubella, and smallpox are not unheard of but they don’t keep many of us up at night. But without vaccinations they most certainly would. All of these diseases greatly impacted the American population in the past, but today cases are increasingly rare thanks to the fact most people are vaccinated against them.

Why Are Disease Not Completely Gone After A Vaccine Is Introduced?

Vaccinations dramatically curb the spread of many illnesses, reducing the number of fatalities and life-altering side effects. Still, outbreaks of measles and whooping cough are far from archaic, but why? Vaccines are not a guaranteed as preventative measure, they can wear off over time, and not everyone is vaccinated. Some people still get sick after being vaccinated, although symptoms tend to be greatly reduced as the body is prepared and overall immunity is improved. (Read more)

Getting vaccinated is important for your health as well as the health of everyone you come into contact with. Visit Urgent Medical Center today and get up to date on all of your vaccines!