Do You Need An Anemia Test? How To Know If You Are Anemic

Do You Need An Anemia Test? How To Know If You Are Anemic 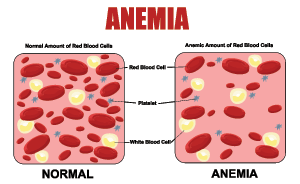 Anemia tests are required to determine if you are anemic. Anemia is caused by a shortage of red blood cells. Symptoms of anemia include frequent fatigue, shortness of breath, dizziness, lightheadedness, skin pallor or a fast/irregular heartbeat. Other symptoms include brittle nails, headaches, cold hands and feet, and confusion. Symptoms of anemia are attributed to many different conditions, so an anemia test is the only way to know for certain.

Usually, symptoms start off very mild, causing most people to remain unaware that they are anemic until the condition worsens and symptoms become more persistent and noticeable.

Anemia means your body is not producing or maintaining enough red blood cells, which may be caused by a number of things. The body naturally produces red blood cells in bone marrow. In order to produce a healthy supply of red cells you need to eat a diet rich in iron, vitamin B-12, folate and other vital nutrients.

Anemia is caused when your red blood cell count (hemoglobin) dips below normal range. For men, this number is typically anything under 13.5-gram/100 ml. For women, anemia is considered anything less than 12.0 gram/100 ml.

There are a few reasons your blood could be low in red blood cells:

-Your body does not produce enough red blood cells.

-Your body destroys the red blood cells it makes.

-When you bleed you loose red blood cells faster than the body can reproduce them.

In order to test for anemia a complete blood count is conducted in which your hemoglobin and hematocrit levels are closely checked. If your hemoglobin levels are off, this will impact how many red blood cells your body is able to produce. Different types of anemia are caused by different things, a blood test helps to determine if you are anemic, but further testing may be required to source the exact cause.

Before starting any treatment regime a doctor must determine the exact cause. Some treatment methods are beneficial for certain types of anemia while the same treatments are detrimental to others.

-Vitamin Deficiency Anemia: If your diet is low in B-12 and folate your body cannot produce a healthy number of red blood cells.

Iron deficiency may be caused by diet, blood loss related to ulcers, menstrual bleeding, and frequent use of aspirin and some other over-the-counter pain medications. Pregnant women are also more susceptible, which is why it’s recommended to take Iron supplements throughout pregnancy.

-Bone Marrow Diseases: Bone marrow disease can be mild or life threatening. It generally involves some sort of disease, such as leukemia or myelofibrosis, which impacts your bone marrow’s ability to produce blood.

-Aplastic Anemia: This is a very rare form of anemia but it is life threatening. It occurs when the body fails to produce enough red blood cells due to an autoimmune disease, exposure to toxic chemicals or certain medications.

Are You At Risk For Anemia?

You are at a greater risk for developing anemia if…

-You eat a poor diet lacking in vital nutrients such as iron, vitamin B-12 and folate.

-You have a chronic intestinal disorder such as Crohn’s or celiac disease.

-You are pregnant and do not take a multivitamin with folic acid.

-You have any chronic condition such as cancer or kidney failure.

-You have a family history of anemia

-Regular use of certain medications such as Advil

In most cases, anemia can be cured with proper diagnoses and treatment.

We offer on-the-spot anemia tests with fast results. Visit us today and get on the road to recovery.